After graduating from Troy State University with a Bachelor of Science Degree in Criminal Justice, Chief Ashburn began his law enforcement career in 1982 when he joined the Georgia State Patrol as a Dispatcher. He was promoted to Trooper in 1984 and attended the 60th Trooper School. For his 31 years with the Department, he held the ranks of Corporal, Sergeant, Sergeant First Class, Lieutenant and Captain. His assignments included Posts located in Thomson, Madison, Milledgeville, Manchester, LaGrange, Thomaston and Cartersville. During his career, he received specialized training in many areas of law enforcement and administration. The highlight of his training was being selected to participate in the Law Enforcement Exchange Program with the Israeli Police. He traveled to Israel and spent 10 days with the Israeli Police learning how they deal with terrorists and how they protect their borders. While with the Georgia State Patrol, he earned his Masters Degree in Public Administration from Columbus State University and completed the Law Enforcement Command College program. Some of the high profile security details he participated in include the 1996 Summer Olympic Games, The Masters, Atlanta Falcons and Georgia Bulldog football games; as well as Presidential visits. Chief Ashburn was hired by the City of Madison as Chief of Police on March 1, 2013. 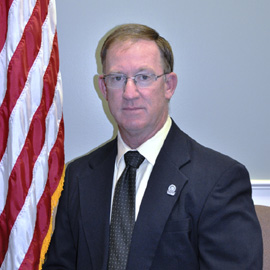 "It is a pleasure to have been selected as Police Chief of my hometown of Madison. Growing up in Madison gave me a special bond to the community and the citizens in it. I am humbled to be given the opportunity to serve with the fine staff of the Madison Police Department!"